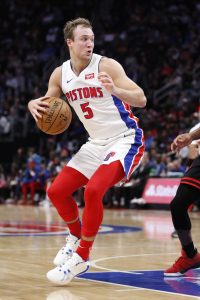 “We are excited to secure a commitment from a dynamic, emerging young player who continues to grow every day,” Clippers president of basketball operations Lawrence Frank said in a statement. “We have been impressed with Luke’s versatility and maturity, and it’s been a privilege to get to know him better during this training camp. We believe he is a fantastic fit for our organization and we are delighted he feels the same.”

The deal includes $56MM in guaranteed money, plus $8MM in additional bonuses that are considered attainable, tweets Andrew Greif of The Los Angeles Times.

The Pistons’ new front office sent Kennard to Los Angeles in a three-team offseason trade that saw Saddiq Bey and Rodney McGruder land in Detroit. The 24-year-old’s asking price on an extension – along with his injury history and the team’s change in direction – played a part in Detroit’s decision to move him, tweets James L. Edwards III of The Athletic.

The Clippers’ investment in Kennard suggests his new club has confidence that his knee problems are behind him. If he earns the full $16MM per year on his new deal, that would put Kennard in the same neighborhood of recent free agent signees like Davis Bertans ($16MM per year), Marcus Morris ($16MM), and Malik Beasley ($15MM).

New contracts for Morris, Paul George, and now Kennard have pushed the Clippers well over the projected cap and likely into luxury tax territory for the 2021/22 season, notes ESPN’s Bobby Marks (via Twitter).