Jordan McLaughlin To Return To Timberwolves

The Timberwolves are bringing back restricted free agent point guard Jordan McLaughlin on another two-way contract, per Shams Charania of the Athletic (via Twitter). Today was the deadline for him to accept his qualifying offer, which is equivalent to a two-way deal. 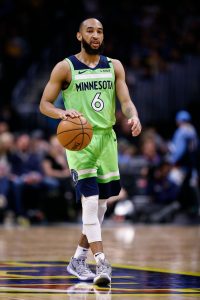 McLaughlin’s play as a rookie on a two-way deal during the 2019/20 season could have qualified him for a promotion to a standard deal this season, but Charania notes that McLaughlin opted to bet on himself and reach restricted free agency again in 2021.

According to Darren Wolfson of 5 Eyewitness News (Twitter link), McLaughlin could have made more money in the immediate future by agreeing to a standard contract, which the Timberwolves had offered. However, it would’ve been a team-friendly multiyear deal with non-guaranteed years and/or a team option.

Having accepted another two-way contract, McLaughlin will be eligible next summer for a qualifying offer that will be equivalent to a partially guaranteed one-year deal.

McLaughlin had been the final restricted free agent on the 2020 market, so only unrestricted FAs remain unsigned.

5 thoughts on “Jordan McLaughlin To Return To Timberwolves”