10:08pm: The team officially announced the Batum signing in a press release and the Tucker signing in a separate release. 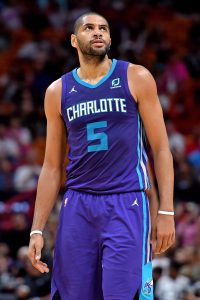 9:43pm: After clearing waivers following his release by the Hornets, veteran free agent forward Nicolas Batum will sign with the Clippers, Shams Charania of The Athletic tweets.

Batum’s intention to sign with Los Angeles was initially reported by Charania after he was officially waived by Charlotte. The 31-year-old wing was a solid three-and-D contributor in his prime with the Trail Blazers and Hornets, but his production noticeably declined after he signed a five-year, $120MM extension with the Hornets in 2016.

The Clippers are no doubt hoping Batum can conjure a semblance of this output in a fraction of the minutes for a championship contender led by star swingmen Kawhi Leonard and Paul George.

Batum is set to compete with fellow free agent wing Rayjon Tucker for reserve minutes, as Charania adds in a separate tweet that the Clippers will also sign Tucker. It’s an Exhibit 10 contract for Tucker, per Andrew Greif of The Los Angeles Times (Twitter link).

The 23-year-old shooting guard, who split his college eligibility between Florida Gulf Coast and Little Rock, went undrafted in 2019. He played for the Bucks’ G League affiliate, the Wisconsin Herd, to start the 2019/20 NBA season. He then signed on with the Jazz for the remainder of the season. Between stints with the Herd and Utah’s G League club, the Salt Lake City Stars, Tucker played 19 G League games.

A defensive specialist at the next level, Tucker played 20 regular season games for the Jazz, averaging 8.1 MPG. Earlier this offseason, the Jazz traded Tucker to the Cavaliers, who subsequently waived him.