5:34pm: Anunoby’s extension is now official, the Raptors announced in a press release. 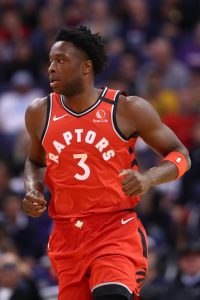 “OG is the epitome of the skilled, powerful, determined player we want in our organization long-term. Remember, he doesn’t shoot to miss,” general manager Bobby Webster said in a statement. “We’re really pleased that OG will be with us for seasons to come.”

The final year of Anunoby’s new deal will feature a player option, Wojnarowski adds. According to Blake Murphy of The Athletic (Twitter link), the extension is structured to increase by the maximum 8% annually to allow Toronto to maximize its 2021 cap room. It won’t include any bonuses or a trade kicker, Murphy adds (via Twitter).

While the extension will cut into the Raptors’ projected cap space to some extent, the difference in minimal, according to ESPN’s Bobby Marks, who notes (via Twitter) that Anunoby would have had a $11.7MM cap hold as a restricted free agent. Instead, he’ll have a starting salary of $16.1MM, reducing Toronto’s space by just over $4MM.

The Raptors have now locked up three key young pieces for the next several seasons. Pascal Siakam‘s extension kicks in this season and keeps him under contract through 2023/24. Fred VanVleet was re-signed this offseason for four more years, with the last one including a player option.

Anunoby’s extension could turn out to be a bargain if he continues to improve, and the Raptors will still have cap flexibility next summer, as Josh Lewenberg of TSN Sports notes (Twitter link).

Anunoby averaged a career-best 10.6 PPG and 5.3 RPG in 29.9 MPG as a starter last season. He’s also considered a defensive stalwart and averaged 1.4 SPG.