2:55pm: The Rockets have officially waived Cousins, according to Jonathan Feigen of The Houston Chronicle (Twitter link). 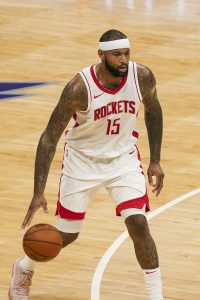 7:56am: The Rockets have decided to release veteran center DeMarcus Cousins, sources tell Shams Charania of The Athletic (Twitter link). Assuming he clears waivers, Cousins will become an unrestricted free agent and will be able to sign with any team.

Houston and Cousins’ representatives reportedly decided over the weekend to end the relationship, with the Rockets said to be going younger and smaller in their frontcourt. The team explored the trade market in an attempt to get something in return for the 30-year-old, but today’s update suggests there were no deals out there worth making.

While he had a few big games for the Rockets, Cousins – who is coming off a series of major leg injuries, including a torn ACL – hasn’t looked like his old All-Star self this season, averaging just 9.6 PPG and 7.6 RPG on 37.6% shooting in 25 games (20.2 MPG). His limited mobility also reduced his effectiveness on the defensive end.

In a show of good will, the Rockets guaranteed Cousins’ full-season salary last week, so any team mulling a waiver claim on the big man would have to be comfortable taking on his full $1.62MM cap hit. If he clears waivers and signs a new minimum-salary contract, that deal would only be worth a prorated portion of the veteran’s minimum, while Houston would carry $1.62MM in dead money.

Cousins should generate some interest around the NBA as a backup frontcourt scorer, but it’s unclear which team might emerge as his top suitor. Although the Lakers had him on their roster last season as he recovered from his ACL tear and will have two open roster spots, multiple people with knowledge of the situation said they don’t expect a reunion between L.A. and Cousins, according to Dan Woike and Broderick Turner of The Los Angeles Times.

Cousins reportedly has some interest in the Heat, but it remains to be seen how seriously Miami will reciprocate that interest.

Once Cousins officially hits waivers, the Rockets will have an open spot on their 15-man roster.