8:06pm: The trade for Bjelica is now official, per a Heat press release. 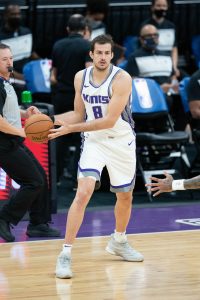 11:46am: The Heat and Kings are finalizing a trade that will send forward Nemanja Bjelica to Miami, sources tell ESPN’s Adrian Wojnarowski (Twitter link). Sacramento will receive Maurice Harkless and Chris Silva in the deal, Woj adds (via Twitter).

The Heat have been linked to the stretch four for several weeks. They could have fit Bjelica’s $7.15MM salary into a $7.5MM trade exception, which expired on Monday. Instead, Heat president Pat Riley opted to send out players in order to stay below the luxury tax line. Harkless has an expiring $3.623MM contract and Silva is making $1.52MM. There’s a $1.78MM team option attached to Silva’s contract for next season.

As ESPN’s Bobby Marks notes (Twitter link), Miami stays $3.3MM below the tax line and also opens up a roster spot in the two-for-one transaction. Sacramento will have to waive or trade a player to accommodate the extra incoming player.

Bjelica’s role was greatly diminished this season as the new front office and coach Luke Walton made Marvin Bagley III the starter at power forward following an injury-plagued season until he fractured his hand this month.

Bjelica’s 3-point threat will likely make him a rotation player for the Heat the remainder of this season. They can then decide whether to re-sign the unrestricted free agent or let him walk to create additional cap flexibility. They’ll have his Bird rights and can go over the cap to re-sign him.

Harkless and Silva only appeared in 11 games apiece this season. They’ll get a fresh start in Sacramento, unless the Kings opt to waive one or both of them.