After acquiring him in a larger three-team deal, the Knicks will be waiving former Sixers center Vincent Poirier, Adrian Wojnarowski of ESPN tweets. 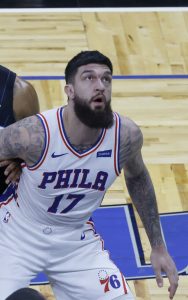 New York also will have gained a 2021 second-round pick and former Thunder swingman Terrance Ferguson from Philadelphia in the trade.

During his second NBA season, Poirier failed to crack Philadelphia’s big man rotation. This year, the 27-year-old seven-footer is averaging just 3.9 MPG across a scant 10 games, even with All-Star center Joel Embiid absent recently due to a bone bruise in his left knee.

Releasing Poirier will give New York an open roster spot, as Ian Begley of SNY observes (via Twitter). That roster spot may not stay open for long, however.

The Knicks may still be very much in the hunt for a new center on the buyout market, as Stefan Bondy of the New York Daily News reports that New York’s relatively quiet maneuvering at the deadline gives them plenty of available capital. As we relayed earlier today, the team could be looking to add Cavaliers center Andre Drummond, who is reportedly working towards a buyout with Cleveland.