4:37pm: The trade sending Vucevic to Chicago is official, according to a press release from the Magic. 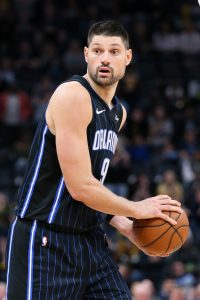 “Anytime you trade a player like Nikola, it is a tough decision to make,” president of basketball operations Jeff Weltman said in a statement. “‘Vooch’ will go down as one of the best players to ever wear a Magic uniform and we can’t thank him enough for all the contributions he made to the organization, both on and off the court.”

According to Wojnarowski, Orlando will receive Wendell Carter, Otto Porter, and a pair of future first-round picks in the deal. Those picks will be the Bulls’ own 2021 and 2023 first-rounders, Woj adds (via Twitter). Both will be top-four protected, per Shams Charania of The Athletic and K.C. Johnson of NBC Sports Chicago (Twitter links).

The agreement comes as a major surprise. While Vucevic has been mentioned in some trade rumors in the weeks leading up to the deadline, he had talked about being happy with his current situation, and there was a belief that the Magic were reluctant to move their lone All-Star and shift into full-fledged retooling mode. Wojnarowski (Twitter link) had reported earlier today that Orlando was still listening to offers for the big man, but would have to receive a substantial package to pull the trigger on a deal.

The Magic apparently believe the Bulls’ offer qualifies as substantial. In addition to the future first-round picks, which are the prized assets in the return, Orlando will also receive a former lottery pick in Carter who was highly regarded coming out of Duke and is still just 21 years old. Carter has been plagued by injury issues through his first three NBA seasons and his production hasn’t really increased since his rookie year, but he’s still viewed as a player with upside.

Orlando will also gain some longer-term salary relief in the trade. While Porter is earning more ($28.5MM) this season than any of the other three players involved in the swap, his contract will expire this summer. Vucevic is owed and Aminu are owed a combined $34MM+ next season, and Vucevic is under contract for one more year beyond that, so the Magic will have much more cap flexibility going forward.

The move also signals that Aaron Gordon is even more likely to be dealt today, with the Magic headed for a reset. The odds of the team moving Evan Fournier and/or Terrence Ross figure to increase as well. As Keith Smith of Yahoo Sports tweets, Orlando will boost the odds of landing a top pick in the 2021 draft by trading away veterans — that lottery pick, combined with the return of Jonathan Isaac and Markelle Fultz next season, could help accelerate the team’s rebuild.

The Bulls, meanwhile, weren’t among the teams listed as having significant interest in Vucevic in a report earlier this month, but decided to take a big swing and will add a second All-Star to a core headlined by Zach LaVine.

The team’s front office wanted to bring in a “productive, serious-minded veteran” to be a cornerstone in Chicago, according to Wojnarowski (Twitter link), and zeroed in on Vucevic, who has posted a career-high 24.5 PPG this season to go along with 11.8 RPG and 3.8 APG. His .406 3PT% is also a career-best mark.

Taking on Aminu’s multiyear contract will add some money to the Bulls’ cap in 2021, but the club was projected to have plenty of flexibility, so that shouldn’t be an issue. Vucevic’s contract is also relatively team-friendly — he’s making $26MM this season, but that number will decline to $24MM in 2021/22 and $22MM in ’22/23.

It will be interesting to see whether the Bulls have more up their sleeve before today’s deadline. The team has been taking calls to gauge Thaddeus Young‘s value, per Joe Cowley of The Chicago Sun-Times (Twitter link), and remains in the mix for Pelicans point guard Lonzo Ball, according to Wojnarowski (Twitter link).

It will take more than just Lauri Markkanen to acquire Ball, tweets Johnson. New Orleans may want Chicago to take on an unwanted multiyear contract, such as Eric Bledsoe‘s.