5:33pm: The amount of Aldridge’s buyout was actually $5.8MM, per Wojnarowski (via Twitter). While that’s not quite as high as Charania’s report suggested, it’s still a significant amount, considering he only had about $8.5MM left on his deal, tweets ESPN’s Bobby Marks. 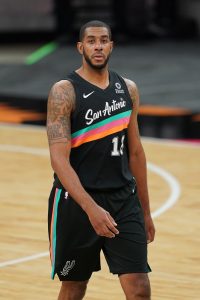 4:31pm: Aldridge gave back $7.25MM in his buyout agreement with the Spurs, tweets Charania. That’s a sizeable portion of the money that was left on his $24MM expiring salary and more than players typically give up as part of a buyout.

Charania notes that the Trail Blazers will be in the mix to sign Aldridge, though he reiterates that Miami is the frontrunner.

4:08pm: The Spurs have completed their buyout with Aldridge and have placed him on waivers, according to Shams Charania of The Athletic (Twitter link). He’ll be able to sign with a new team as of Saturday evening.

2:47pm: LaMarcus Aldridge is negotiating a buyout with the Spurs, tweets Chris Haynes of Yahoo Sports.

San Antonio decided two weeks ago to part with the veteran big man, who is in his sixth season with the team. Aldridge lost his starting job earlier this year and saw his minutes reduced to 25.9 per game. He hasn’t played since March 1.

Aldridge will likely have to give up some of his $24MM salary to secure his freedom from the Spurs. The Heat are considered the favorites to sign Aldridge once he clears waivers, but he plans to talk with several teams before making a decision, according to ESPN’s Adrian Wojnarowski (Twitter link).