5:07pm: The trade sending Powell to Portland is official, according to a team press release. Raptors team president Masai Ujiri lauded Powell’s contributions to Toronto in a statement. 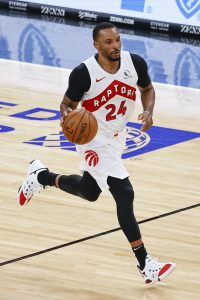 “Norman accomplished so much with the Raptors,” Ujiri said in part. “Norman is an NBA Champion, and he has earned his place as one of the great success stories in franchise history.”

11:52am: The Raptors will send Norman Powell to the Trail Blazers in exchange for Gary Trent Jr. and Rodney Hood, tweets ESPN’s Adrian Wojnarowski.

Portland won the bidding war for Powell, who is expected to turn down an $11.6MM player option for next season and become a free agent. He will add another scoring option to a Blazers team that already has Damian Lillard and CJ McCollum in the backcourt.

It was reported that roughly half the league had called Toronto to inquire about Powell, who is having a career-best season at 19.5 PPG.

The Raptors opted for financial flexibility in the deal. Hood, 28, has a $10.86MM contract for next season that is non-guaranteed until June 23. Hood’s playing time has dropped off sharply this season and he’s shooting just 29.8% from beyond the arc.

Trent is making $1.66MM and will be a restricted free agent this summer if Toronto makes a $2.12MM qualifying offer. The third-year swingman became a part-time starter this season and is averaging a career-high 15.0 PPG. He has knocked down 40.7% of his three-point attempts over the last two seasons.

Since the Raptors will have the right to match any offer Trent receives, the team should have an easier time retaining him than it would have with Powell, who will be unrestricted. Trent’s cap hold will also be just $2.12MM, as Bobby Marks of ESPN notes (via Twitter), allowing the Raptors to open up more cap room.

Portland generates a $1.7MM trade exception in the deal, tweets Marks. Bird rights will accompany Powell and Trent, so their new teams can go over the cap to re-sign them.