MAY 7: The Pelicans have made it official, issuing a press release to formally announce Marshall’s new contract. 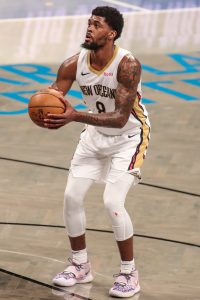 MAY 6: The Pelicans have reached an agreement with rookie forward Naji Marshall on a new deal that will promote his from his two-way contract to a spot on the 15-man roster, according to Shams Charania of The Athletic (Twitter link).

Sources tell Charania (Twitter link) that the deal will cover four years — the rest of this season, plus the next three. It will be fully guaranteed through 2022/23, with a non-guaranteed fourth year, Charania adds. The Pelicans will use a portion of their mid-level exception to complete the signing.

Charania pegs the value of the deal at $5.3MM, which indicates it’s a minimum-salary contract. That comes as no surprise, since today is the first day that the Pelicans were able to add a 15th man to their roster on a rest-of-season minimum deal without surpassing the luxury tax line.

Marshall, who signed a two-way contract with New Orleans in December after going undrafted out of Xavier, has emerged since the start of April as a regular rotation player for the club. For the season, he has averaged 6.4 points, 4.1 rebounds, and 2.6 assists per game in 26 contests (19.8 MPG). He has knocked down 37.3% of his three-point attempts.

Once the move is official, the Pelicans will have an open two-way contract slot, which they could fill before their season ends on May 16, if they so choose.