Heat guard Victor Oladipo will undergo surgery on the same right quadriceps tendon that he ruptured in 2019, the team announced today (via Twitter). The procedure will end Oladipo’s season and there’s no timetable for his return, per the club. 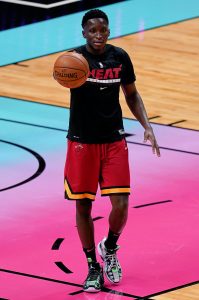 It’s a disappointing turn of events for Oladipo and for the Heat, who acquired the two-time All-Star at the trade deadline in March. However, if there’s a belief that going under the knife again represents Oladipo’s best path back to full strength, it’s the right call.

According to Tim Reynolds of The Associated Press (Twitter link), Oladipo made the decision himself to undergo surgery, but the Heat were in agreement. A source tells Barry Jackson of The Miami Herald (Twitter link) that the quad tendon isn’t ruptured this time around, so there’s hope that Oladipo’s recovery will be quicker than it was in 2019-20.

Oladipo, who returned from his previous quad tendon injury in January of 2020, never seemed to fully recapture his old All-Star form during the last year. In 33 games this season for the Pacers, Rockets, and Heat, the 29-year-old posted respectable marks of 19.8 PPG, 4.8 RPG, and 4.6 APG, but his shooting averages (.408/.326/.754) were well below his career numbers and he didn’t look as explosive as he had during his first two years in Indiana.

With Oladipo unavailable going forward, the Heat will continue to rely on a backcourt rotation headed by Tyler Herro, Kendrick Nunn, and Goran Dragic.

As for Oladipo, he’s on track to become an unrestricted free agent this offseason and his stock will certainly be affected by this development. Teams interested in signing Oladipo will keep a close eye on his recovery process, and it seems possible he’ll end up on a short-term deal that would allow him to try to rebuild his value before he returns to the open market in a year or two.