The NBA has officially announced the All-NBA First, Second, and Third Teams for the 2020/21 season, with Giannis Antetokounmpo leading the way as the lone unanimous selection for the First Team.

Antetokounmpo and Nuggets‘ MVP Nikola Jokic were the two top vote-getters, combining for 998 out of a possible 1,000 points, with Warriors guard Stephen Curry following shortly behind. Clippers forward Kawhi Leonard and Mavericks guard Luka Doncic rounding out the top five. 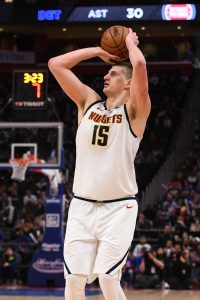 Today’s announcement has major financial implications across the league. Tatum, who received more votes than Kyrie Irving but still fell 20 votes short of a final forward spot, will lose out on a projected $32.6MM on his rookie scale extension, as his next deal will start at 25% of the cap instead of the 30% he would have received if he’d been named to an All-NBA team. Likewise, Jazz guard Donovan Mitchell, Kings guard De’Aaron Fox and Adebayo will all receive starting salaries worth 25% of the cap on their respective extensions as a result of missing out on All-NBA honors.

Doncic, having been named to his second consecutive All-NBA First Team, will be eligible for a 30% extension that would be worth a projected $201MM+ and is almost certain to be offered this summer. Doncic has previously made clear his intentions to sign the extension when offered. It will go into effect for the 2022/23 season.

Embiid is now eligible for a super-max contract extension, which would run for four years, starting in 2023/24, and would be worth a projected $191MM, according to ESPN’s Bobby Marks. It’s unclear whether the Sixers will immediately put this extension on the table this offseason.

Bradley Beal‘s deal will not change with his first career All-NBA selection, as he is already eligible for a 35% contract extension on his next deal. Jokic, having been named MVP previously this week, also sees no change in his possible future super-max extension, which will be worth approximately $241MM.

Hoops Rumors readers accurately picked 12 of this season’s 15 All-NBA players in our poll. Devin Booker, Adebayo, and Tatum were your picks who didn’t make the official list.