10:01pm: The team has confirmed in a press release that Stotts will not return. 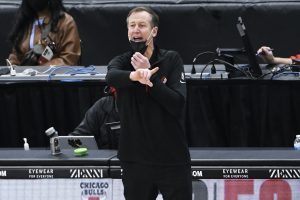 “I have the utmost respect for Terry and what he has accomplished these past nine seasons,” president of basketball operations Neil Olshey said in a statement. “This was a difficult decision on both a personal and professional level but it’s in the best interest of the franchise to move in another direction. Terry will always hold a special place in the Trail Blazer family and the Portland community. We relied on the integrity, professionalism and consistency he brought to the job every day and we wish he and Jan nothing but the best.”

Stotts, 63, has been the team’s head coach since the 2012/13 season. Portland has qualified for the playoffs in eight consecutive seasons but only made the conference finals in 2018/19, when they were swept by the Warriors. The Blazers have been eliminated in the first round in two consecutive years, and four of the last five.

The Blazers’ quick exit in this year’s playoffs was unexpected. They were facing a depleted Nuggets team, missing starting guards Jamal Murray and Will Barton, while all of their own starters were healthy. Despite some stellar performances from Damian Lillard, Portland was eliminated in six games.

Lillard has played under Stotts throughout his career. The All-Star point guard will have a major say on Stotts’ replacement, Chris Haynes of Yahoo Sports tweets.