The mid-level exception is the most common way for over-the-cap NBA teams to sign free agents from other clubs for more than the minimum salary. It ensures that each team heads into the offseason with a little spending flexibility, even if that franchise is deep into luxury-tax territory.

Each team is eligible to use a specific type of mid-level exception depending on its proximity to the salary cap. The most lucrative form of mid-level is available to teams that are over the cap but below the tax apron. Clubs deep into the tax, and even those under the cap, have access to lesser versions of the MLE. Here’s a breakdown of how all three forms of the exception are structured:

For teams above the cap and the tax apron:

For teams with cap room:

Each form of the mid-level allows for annual raises of up to 5% of the value of the first season’s salary. Last offseason, we broke down the maximum total salaries that players signed using the mid-level exception in ’20/21 could earn. Those numbers can be found right here. 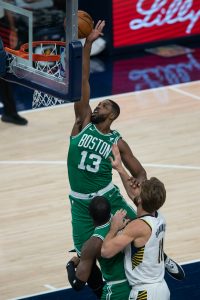 However, clubs are also allowed to split the mid-level among multiple players, and that’s a common course of action. For instance, the Kings used their MLE to complete four separate signings in 2020/21, devoting parts of it to Robert Woodard, Jahmi’us Ramsey, and Chimezie Metu (twice). Sacramento signed Metu using the mid-level, waived him, then used the MLE again to re-sign him later in the season.

Players drafted in the second round often sign contracts for part of the mid-level because it allows teams to give them contracts for more years and more money than the minimum salary exception provides. Woodard and Ramsey were both second-round picks in 2020 whom the Kings signed using the MLE.

Without the MLE, Sacramento would have been limited to two-year deals starting at $898,310 for those two rookies. The mid-level allowed the Kings to pay them more, sign them to longer deals, and to ensure they’ll have full Bird rights if they play out their contracts, rather than just the Early Bird rights they’d have after two years.

Some front offices prefer to leave all or part of the mid-level exception unused in the offseason so it’s still available near the end of the regular season. At that point, a contender could use its MLE to try to sign an impact veteran on the buyout market.

A non-contending club, on the other hand, could use its MLE to lock up an intriguing developmental player to a long-term contract, like the Heat did at the end of the 2018/19 campaign with Duncan Robinson and Kendrick Nunn. Both players, who signed in the season’s final week, would have reached restricted free agency in 2020 if Miami had used the minimum salary exception to sign them to two-year contracts instead of using the MLE to negotiate three-year deals.

Near the end of the 2020/21 season, the Thunder used a portion of their mid-level exception to sign Gabriel Deck to a four-year contract with a salary worth $3.87MM in ’20/21. That oversized first-year salary, made possible by the MLE, gave Oklahoma City the leverage to make the rest of the contract non-guaranteed.

Unlike the bi-annual exception, the mid-level exception can be used every season. So whether or not a team used its mid-level in 2020/21, each club will have the opportunity to use some form of the MLE when the 2021/22 league year begins.

Under the old Collective Bargaining Agreement, the mid-level exception increased annually at a modest, fixed rate. However, under the current CBA, the mid-level increases – or decreases – at the same rate as the salary cap, ensuring that its value relative to cap room remains about the same from year to year. We’ve estimated 2021/22’s MLE figures based on the NBA’s projection of a 3% salary cap increase — a more substantial cap increase would mean next season’s mid-level is worth a little more too.