JULY 31: The Celtics will send Moses Brown – recently acquired from Oklahoma City – to Dallas in the deal for Richardson, tweets Charania. A simple one-for-one swap, the trade is now official, according to an announcement from the Mavs. 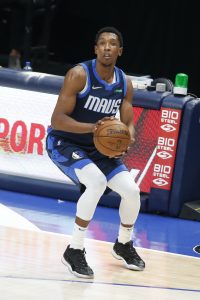 JULY 30: The Mavericks are finalizing a trade that would send swingman Josh Richardson to the Celtics, Shams Charania of The Athletic tweets.

Richardson will exercise his $11.6MM option in order to make the deal happen, Charania adds.

The Celtics are using a $11.05MM trade exception acquire in the Gordon Hayward sign-and-trade last year in order to make the deal, Bobby Marks of ESPN tweets. Richardson made $10.86MM this past season, so Boston will finalize the deal on Saturday before the league calendar flips. The Mavericks will generate a trade exception worth the same amount.

Dallas could have up to $34MM in cap room entering free agency, though creating that much space would require renouncing Tim Hardaway Jr.‘s cap hold, Marks adds.

Richardson averaged 12.1 PPG and 2.6 APG in 59 regular-season games with Dallas this past season, including 56 starts. He’s a career 35.8% 3-point shooter and 83.2% free throw shooter with the reputation of being a quality perimeter defender.

The Celtics also agreed to a three-way deal on Friday in which they shipped big man Tristan Thompson to the Kings and acquired guard Kris Dunn from the Hawks. However, Dunn could be moved as part of another trade, according to Adam Himmelsbach of the Boston Globe (Twitter link).