AUGUST 10: The Bulls have officially signed Caruso, according to the transactions log at NBA.com. 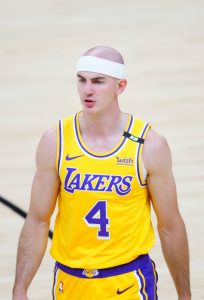 AUGUST 2: The Bulls have agreed to a four-year, $37MM deal with free agent guard Alex Caruso agent Greg Lawrence tells Adrian Wojnarowski of ESPN (Twitter link). Based on the terms of the agreement, it sounds like the team will use most of its mid-level exception on Caruso.

The Bulls agreed to a sign-and-trade with the Pelicans to acquire starting point guard Lonzo Ball and Caruso will likely be the primary backup, though he could also get some minutes at shooting guard. He has made 37.7% of his 3-point attempts during his career.