AUGUST 13: The Celtics have officially signed Schroder, according to a team press release. 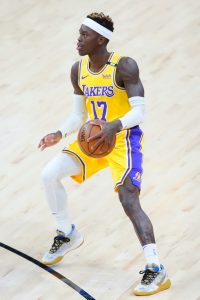 “We are really excited to welcome Dennis and his family to Boston,” president of basketball operations Brad Stevens said in a statement. “Dennis is a high-level player and competitor, who has consistently impacted winning with his play on both ends of the court.”

AUGUST 10: The Celtics and free agent point guard Dennis Schröder are in agreement on a one-year contract, reports Adrian Wojnarowski of ESPN (Twitter link). According to Wojnarowski (via Twitter), the deal will be worth the $5.89MM taxpayer mid-level exception.

Schröder has officially confirmed in an Instagram story that he’s joining the Celtics.

“This is one of the best franchises in NBA history and it will be a honour to put on the green and white and do what I love!” Schröder wrote. “I’m going out there every night and leaving it all on the floor for the city!! Who’s ready?!”

We first heard last week that the Celtics and Schröder were engaged in contract discussions, with a report earlier today indicating the team had offered him a one-year, $5.9MM deal.

Today’s report suggested Schröder was seeking a second-year player option and the full non-taxpayer mid-level exception (worth about $9.5MM), but the C’s wanted to maintain cap flexibility in 2022 and avoid hard-capping themselves this season. It appears Schröder relented.

Schröder had an up-and-down season for the Lakers in 2020/21 after being acquired from the Thunder last fall. His scoring average dipped to 15.4 PPG, his lowest mark since 2015/16, and his shooting numbers (.437 FG%, .335 3PT%) also fell off a little following a career year in Oklahoma City.

Despite Schröder’s inconsistent play in Los Angeles, the extent to which his market collapsed is still surprising. He reportedly turned down a four-year extension offer worth in excess of $80MM during the season. When the Lakers agreed to trade for Russell Westbrook, it closed one door for Schröder, and the teams seeking a point guard in free agency didn’t have the German atop their lists of targets.

As a result, the Celtics – who traded away starting point guard Kemba Walker in June – will get a bargain for the 2021/22 season, while Schröder will look to rebuild his value in Boston before re-entering the free agent market in 2022.

As Chris Forsberg of NBC Sports Boston notes (via Twitter), if the Celtics remain committed to not using more than the taxpayer portion of their mid-level exception, they’ll be limited to one- or two-year minimum-salary deals for any other signings, including draft-and-stash prospect Yam Madar.