8:35pm: A team press release has confirmed the signing, Keith Langlois of Pistons.com tweets. The second year of the contract is a team option, James Edwards III of The Athletic tweets. 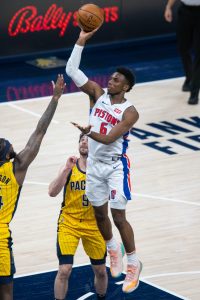 As Bobby Marks of ESPN notes (Twitter link), the Pistons will eventually have to make another roster move to fit in Diallo, since they now have 16 guaranteed contracts on their books. There’s no rush to make that move, since teams can carry up to 20 players in the offseason.

Diallo appeared in 20 games after Detroit acquired him from Oklahoma City, averaging 11.2 PPG, 5.4 RPG and 1.2 APG. The high-flying Diallo also showed improvement with his 3-point shot after the mid-season trade, draining 39% of his 3-point shots. He had a breakout season with extended playing time, as he also averaged 11.9 for OKC in 32 games.