The Heat will add Kyle Lowry in free agency via a sign-and-trade with the Raptors and will also re-sign Duncan Robinson, as Marc Stein reports (via Twitter). Both deals had been widely expected, and Lowry has confirmed on Twitter that he’s Miami-bound. 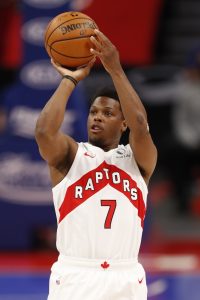 Lowry’s new three-year contract with the Heat will be worth approximately $90MM, according to ESPN’s Adrian Wojnarowski (Twitter link). All three years will be fully guaranteed, tweets Anthony Chiang of The Miami Herald.

The Heat have been after Lowry since at least the trade deadline in March. While they were unable to land the six-time All-Star at the time, they’ll add him to the mix now, beating out other rumored suitors such as the Mavericks, Pelicans, and Sixers. The move will unite Lowry with his close friend Jimmy Butler, who is expected to sign a lucrative new contract extension of his own.

While the exact terms of the sign-and-trade that will send Lowry to Miami haven’t been reported, the expectation is that the deal will include Goran Dragic and Precious Achiuwa, with the Raptors perhaps rerouting Dragic elsewhere.

As for Robinson, he’s a career 42.3% shooter from three-point range, which put him in line for a long-term deal in the range of $16-18MM per year — that’s what sharpshooters Joe Harris and Davis Bertans received in free agency a year ago and the 27-year-old Robinson is a little younger than both players.

The Heat still have the mid-level exception at their disposal as they look for additional rotation upgrades around Lowry, Robinson, Butler, and Bam Adebayo.