Kemba Walker Agrees To Buyout With Thunder, Will Join Knicks

12:55pm: Walker’s deal with the Knicks will be a two-year contract worth about $8-9MM annually, league sources tell Ryan McDonough of NBC Sports Boston (Twitter link). 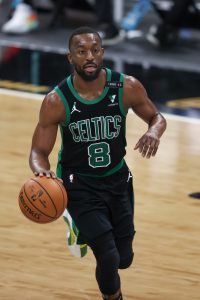 9:03am: Veteran point guard Kemba Walker has agreed to a contract buyout with the Thunder, according to ESPN’s Adrian Wojnarowski (Twitter link), who reports that Walker will sign with the Knicks once he clears waivers.

The Thunder acquired Walker from Boston back in June in Brad Stevens‘ first major roster move as the Celtics’ president of basketball operations. Although that deal was considered a salary-dump, with Oklahoma City receiving a first-round pick for taking on Walker, a report last week stated the Thunder believed they might be able to flip him to another team for an asset. It appears those efforts were unsuccessful.

While Walker clearly wasn’t in Oklahoma City’s long-term plans, the fact that the team agreed to buy him out already is a little surprising, since the 31-year-old still had two years and nearly $74MM left on his contract. We’ll have to wait for details on how much of that money he’s giving up as part of the agreement with the Thunder.

The move will open up more playing time for the Thunder’s young ball-handlers besides Shai Gilgeous-Alexander, including Theo Maledon and Josh Giddey, notes Joe Mussatto of The Oklahoman (Twitter link).

The Knicks, meanwhile, are on track to add Walker using their leftover cap room. Based on the terms of their reported contract agreements to date, the Knicks project to have about $8-9MM in space available, and it sounds like the team won’t be making any additional cost-cutting moves to clear extra room to accommodate Walker, per Steve Popper of Newsday (Twitter link).

Jake Fischer of Bleacher Report confirms (via Twitter) that Walker’s deal with New York will be worth about $8MM annually, though it’s unclear how many years it will cover.

The move represents a homecoming for Walker, who has been linked to the Knicks multiple times in the past. He was born and raised in the Bronx.

105 thoughts on “Kemba Walker Agrees To Buyout With Thunder, Will Join Knicks”