AUGUST 18: Rose has officially re-signed with the Knicks, according to NBA.com’s transactions log. 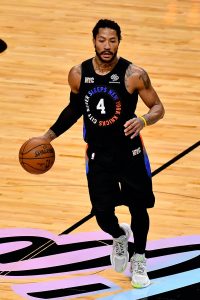 Rose, 32, is set to re-join New York after a successful 2020/21 season with the club. The Knicks pried Rose away from the Pistons early in the year, and Rose quickly ascended the ranks within the team’s guard rotation, playing major minutes for a playoff-bound New York team, led by Rose’s former coach with the Bulls and Timberwolves, Tom Thibodeau.

Rose elevated his play in the Knicks’ first-round playoff series against the Hawks, eventually stepping into the starting lineup for the team’s final three games of the series. He averaged 19.4 PPG, 5.0 APG, and 4.0 RPG across 35.0 MPG.

Rose, a former three-time All-Star and the 2011 MVP before his career trajectory was permanently altered by a series of severe knee injuries, was first traded to the Knicks from the Bulls ahead of the 2016/17 season. He then played for the Cavaliers and Timberwolves before inking a two-year contract with the Pistons in 2019.