AUGUST 6: Anthony’s deal with the Lakers is now official, according to a press release from the team. 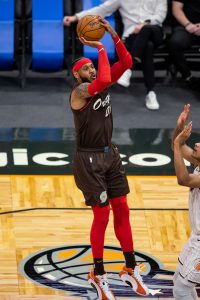 AUGUST 3: Carmelo Anthony will be teaming up with Russell Westbrook, Anthony Davis, and LeBron James in Los Angeles, according to ESPN’s Adrian Wojnarowski (Twitter link), who hears from Anthony’s manager Bay Frazier that the veteran forward has agreed to sign a one-year contract with the Lakers.

Anthony has confirmed the news in a video announcement on Twitter. He’ll get a minimum-salary contract.

Anthony was said to be weighing interest from both the Lakers and Knicks on the first day of free agency and ultimately opted to team up with his close friend James for the first time rather than pursuing a second stint in New York.

After consistently averaging 20+ points per game earlier in his NBA career, the 37-year-old forward has transitioned into a complementary role in Portland over the last two seasons.

The Lakers have been busy filling out their rotation around their stars since free agency began less than 24 hours ago. So far the team has come to terms with Anthony, Malik Monk, Kent Bazemore, Trevor Ariza, Wayne Ellington, and Dwight Howard.