AUGUST 6: The Lakers have made it official with Nunn, announcing his new deal in a press release. 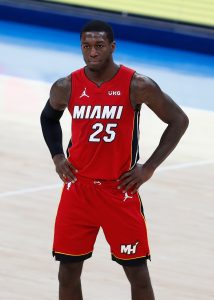 AUGUST 3: The Lakers and point guard Kendrick Nunn are in agreement on a two-year contract with a player option in year two, reports ESPN’s Adrian Wojnarowski (Twitter link).

Agent Adam Pensack tells Shams Charania of The Athletic (Twitter link) that the two-year deal will be worth $10MM, an indication that the Lakers are using the taxpayer mid-level exception to complete the signing.

Nunn turned down more money from the Knicks and other suitors in order to join the Lakers, according to Charania (Twitter link). He should get the opportunity to be Russell Westbrook‘s primary backup at the point on the new-look Lakers in 2021/22.

After beginning the free agency period as a restricted free agent, Nunn had his $4.7MM qualifying offer rescinded by the Heat once it became clear that there wouldn’t be room under the team’s hard cap to fit in a new deal for the 6’2″ guard. That made him unrestricted, opening the door for him to complete a contract agreement with the Lakers.

Having committed to using their taxpayer MLE, the Lakers now have a projected tax bill of $42.3MM, notes ESPN’s Bobby Marks (via Twitter).