AUGUST 8: Trent’s deal with the Raptors is now official, according to a press release from the team. 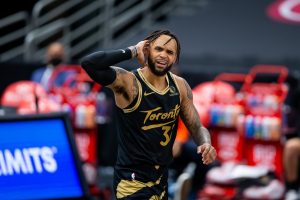 Trent, 22, spent his first two-and-a-half NBA seasons in Portland before being sent to Toronto in a deadline deal involving Norman Powell. Trent averaged a career-best 15.3 PPG on .408/.385/.783 shooting in 58 total games (31.1 MPG) for the Blazers and Raptors in 2020/21 ahead of his first foray into free agency.

Trent decided to play out last season without an extension despite the fact that Portland was believed to be willing to give him a four-year, $54MM deal, the maximum the team could’ve offered before he reached free agency.

That decision paid off for the young wing, who will now make that same amount over three seasons if he opts into his final year. If he opts out in 2023, he’ll hit unrestricted free agency as a 24-year-old and will likely be in position to cash in again.