AUGUST 6: Payne is officially back under contract with the Suns, who announced his deal today in a press release.

AUGUST 2: Free agent reserve point guard Cameron Payne will return to the team that saw him develop into one of the league’s better backup ball handlers this season. After proving himself as a crucial role-playing contributor, Payne will remain with the Suns on a three-year, $19MM contract, per Chris Haynes of Yahoo Sports (via Twitter). 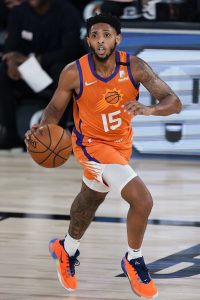 The 6’1″ Payne, 26, blossomed as a backup behind future Hall of Famer Chris Paul in Phoenix during a charmed 2020/21 season, which saw the Suns return to their first NBA Finals in 28 years.

After being initially drafted by the Thunder in 2015 with the No. 14 pick out of Murray State, Payne struggled to develop at the next level. Payne also served stints with Chicago and Cleveland before landing with Phoenix on a two-year deal ahead of the 2020 Orlando “bubble” restart. During his eight-game 2019/20 season cameo, Payne enjoyed a breakout run. Payne average 10.9 PP, 3.9 RPG and 3.0 APG across 22.9 MPG during Phoenix’s 8-0 bubble streak.