Hoops Rumors is breaking down the 2021 offseason for all 30 NBA teams, revisiting the summer’s free agent signings, trades, draft picks, departures, and more. We’ll evaluate each team’s offseason moves, examine what still needs to be done before opening night, and look ahead to what the 2021/22 season holds for all 30 franchises. Today, we’re focusing on the Los Angeles Lakers.

Shortly after the Lakers’ 2020/21 season came to a disappointing early end, general manager Rob Pelinka stated that his goal was to keep the majority of the team’s core together, suggesting that he believed last season’s group would have made a deeper postseason run with some better injury luck.

Four-and-a-half months later, no team has overhauled its roster more than the Lakers, who have just three players from last year’s squad returning for the 2021/22 season. Either Pelinka’s plans changed, he wasn’t telling the full truth when he spoke to reporters in June, or his definition of the team’s “core” was much narrowed than originally believed.

LeBron James and Anthony Davis will be back, of course, as will up-and-coming guard Talen Horton-Tucker, the only one of the Lakers’ many free agents to get a new deal from the team. Los Angeles essentially chose to invest in Horton-Tucker over fellow guards Dennis Schröder and Alex Caruso, betting on the 20-year-old’s upside and ability to continue improving. The three-year, $30.78MM deal he received as a restricted free agent was, by far, the largest deal the Lakers handed out this offseason. 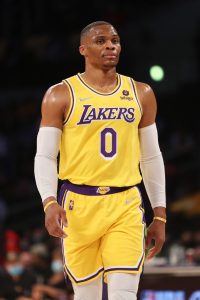 Horton-Tucker’s new contract wasn’t the Lakers’ biggest transactions of the summer. That honor belongs to the five-team blockbuster trade that sent Russell Westbrook to his hometown of Los Angeles, with L.A. surrendering Kyle Kuzma, Montrezl Harrell, Kentavious Caldwell-Pope, and the No. 22 overall pick in this year’s draft.

It was a fascinating decision for a team that had other options. The Lakers were reportedly far down the road with the Kings in discussions on a potential Buddy Hield trade that wouldn’t have had such a significant price tag. Reports at the time suggested the Lakers would’ve been able to hang onto Caldwell-Pope and possibly even the No. 22 pick if they’d been willing to send Kuzma and Harrell to Sacramento for Hield, whose cap hit is about half of Westbrook’s.

On paper, Hield – who is one of the NBA’s most talented shooters – would seem to be a better complementary piece for a team that could have prioritized surrounding its stars with floor spacers who don’t need the ball much. Westbrook is a far more ball-dominant player and a far less effective three-point shooter.

However, the Lakers weren’t interested in a complementary piece. They wanted another star who could take some of the play-making workload off of James and Davis and who could give the team some insurance in the event that either LeBron or AD deals with injuries again. You’d rather have Hield than Westbrook taking an open three with the game on the line, but the Lakers believed Westbrook’s ability to push the pace, attack defense, get to the rim, and make plays for his teammates will ultimately benefit the team more.

Having sacrificed some depth to acquire Westbrook – and having let all of their free agents except Horton-Tucker walk – the Lakers focused on finding reliable depth on the cheap. Young point guard Kendrick Nunn received a two-year, $10MM commitment using most of L.A.’s taxpayer mid-level exception, but every other veteran signed by the team this summer got a minimum-salary deal.

That list of minimum-salary veterans consists of Carmelo Anthony, Dwight Howard, Rajon Rondo, DeAndre Jordan, Kent Bazemore, Malik Monk, Trevor Ariza, and Wayne Ellington, with undrafted rookie Austin Reaves filling out the roster on a minimum deal of his own.

Anthony, Howard, and Rondo are potential Hall-of-Famers who have accepted limited roles in recent years. Their willingness to buy in and be complementary players is great, but they’re all 35 or older and shouldn’t be leaned on for big minutes.

Ariza is another player in that 35-or-older group, and he’s already dealing with an ankle injury that will sideline him for several weeks to open the season. Jordan is still a solid rebounder and a decent defender in certain matchups, but will be played off the court in others. Ellington is a great shooter who doesn’t contribute a whole lot else.

Bazemore and Monk are two of Los Angeles’ more intriguing additions. Bazemore has been up and down in recent years, but if the Lakers get the good version of the three-and-D wing, he could end up playing a pretty major role. Monk, meanwhile, finally had a modest breakout year in 2020/21, knocking down 40.1% of his three-pointers in Charlotte. He’ll get the chance to prove the progress he made was for real.

The Lakers have constructed one of the more top-heavy rosters in the NBA, with James, Davis, and Westbrook earning nearly $121MM this season, while nine of the team’s 11 other players are on minimum-salary contracts. That will make it difficult for the team to complete in-season trades, so L.A. will have to hope that this group stays healthy and that four or five of those minimum guys can be relied upon for productive regular minutes.

Any team with James and Davis on its roster is a legitimate championship contender, though I’m not convinced that this year’s supporting cast is better than last year’s. The answer to that question will largely hinge on whether Westbrook’s fit is a comfortable one or an awkward one.

If the Lakers can make their Big Three work and keep those three stars relatively healthy, they should be able to get enough out of the other 11 guys to make this work. If the addition of Westbrook creates some spacing issues, or if Davis doesn’t adjust well to playing more at the five instead of the four, there could be cause for concern.

The Lakers won’t be my pick to win the 2022 Finals, but they’re a solid playoff team and one of the few NBA clubs with enough talent to compete for a title.