5:53pm: The Pacers and Brogdon have officially completed their new deal, according to the transactions log at NBA.com. 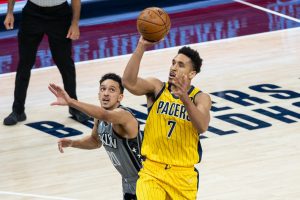 There had been some whispers throughout the offseason that Brogdon could be a trade candidate, and his name – as well as Caris LeVert‘s – surfaced in rumors related to the Ben Simmons trade talks between the Sixers and Pacers. However, subsequent reports suggested that Philadelphia wasn’t that enamored by the idea of a package centered around Brogdon and/or LeVert.

Now that he’s signing an extension, Brogdon won’t be a trade option for the Sixers or any other team this season. As Bobby Marks of ESPN tweets, Brogdon’s new deal exceeds the extend-and-trade limits in the Collective Bargaining Agreement, meaning he won’t become trade-eligible for six months. This season’s trade deadline is on February 10.

As we noted this morning, if Brogdon hadn’t finalized an extension today, he wouldn’t have been eligible to sign one until the 2022 offseason, since he still has multiple years left on his current deal.