6:54pm: The Pelicans have officially announced their new deal with Valanciunas, confirming the extension in a press release. 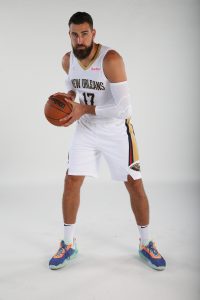 “We’re delighted to be able to continue our relationship with Jonas,” executive VP of basketball operations David Griffin said in a statement. “His deep desire to remain here and his connection to his team, his coaches and the organization represents everything we want to build towards.”

11:19am: The Pelicans and center Jonas Valanciunas have reached an agreement on an extension that will lock him up through the 2023/24 season, agents Aaron Mintz, Mitch Nathan and Drew Morrison of CAA tell Andrew Lopez of ESPN (Twitter link).

According to Lopez, Valanciunas’ two-year extension will be worth $30.1MM. The big man is under contract for $14MM in 2021/22, so he’s now on track to earn $44.1MM over the next three seasons. Because he had been on an expiring deal, Valanciunas was extension-eligible beyond the October 18 deadline that applied to certain other veterans.

Valanciunas averaged a double-double in each of his last two seasons in Memphis, establishing new career highs in 2020/21 with 17.1 PPG and 12.5 RPG in 62 games (28.3 MPG). The 29-year-old isn’t an elite rim protector and doesn’t shoot many three-pointers, but holds his own on defense and can knock down mid-range jumpers.

The Grizzlies dealt Valanciunas to New Orleans in an offseason trade that sent Eric Bledsoe and Steven Adams to Memphis. Having recently acquired Valanciunas, the Pelicans faced extend-and-trade limits in their contract negotiations, tweets ESPN’s Bobby Marks. They couldn’t offer the former No. 5 overall pick more than a 5% raise on this year’s $14MM salary and couldn’t tack more than two years onto his expiring contract.

Those limits would’ve lifted by the end of the year, but Valanciunas opted for security now rather than waiting to see if he could get a more lucrative deal later in the season or as a free agent in 2022.

This is the second consecutive year in which the Pelicans have traded for a veteran center and then signed him to an extension before seeing him take the court alongside star forward Zion Williamson. The organization will be hoping its commitment to Valanciunas works out better than last year’s deal with Adams did.

As Marks observes (via Twitter), Tomas Satoransky is now the only Pelicans (besides two-way players) who isn’t under contract through at least the 2022/23 season.