Cavaliers’ Ricky Rubio Out For Season With Torn ACL

Cavaliers guard Ricky Rubio has suffered a torn ACL in his left knee and will miss the remainder of the 2021/22 season, the team announced (Twitter link). Rubio suffered the same injury to the same knee as a rookie in 2012. 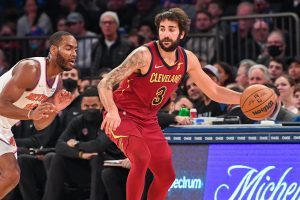 It’s terrible news for both player and team, as Rubio will be an unrestricted free agent in the summer of 2022, and Cleveland had already lost starting guard Collin Sexton for the season to a torn meniscus which required surgery. ACL tears typically have a recovery timeline of about 12 months, so Rubio might not return to the court again until 2023.

The 31-year-old point guard has been instrumental to the Cavaliers’ surprising 20-14 start to the season; they are currently fifth in the East after winning just 22 games last season. Rubio appeared in all 34 of the team’s games to this point, averaging 13.1 points, 4.1 rebounds, 6.6 assists and 1.4 steals in 28.5 MPG.

His shooting slash line of .363/.339/.854 isn’t great, but he has been a locker-room leader, mentor, clutch shot-maker and defensive presence for the young Cavs. He’s currently 10th in the league in defensive win shares, per Basketball-Reference.

As ESPN’s Bobby Marks relays (via Twitter), the Cavs could receive a disabled player exception worth $8.9MM if they choose to apply for it by January 15. However, the Cavs are currently only $3.1MM below the luxury tax threshold and already have a full roster, so they might not end up using it even if they receive it, which they almost certainly would.

Cleveland’s guard depth will be tested with Rubio and Sexton out for the season; rising star Darius Garland is also out for the short term, in the league’s health and safety protocols. Little-used backup Kevin Pangos and rookie two-way player RJ Nembhard could see an uptick in minutes with the three players sidelined. It wouldn’t be surprising to see the Cavs target guards in trades, either.