December 17: Thomas has signed his 10-day deal with the Lakers, sources tell Shams Charania of The Athletic (Twitter link).

December 16: Isaiah Thomas is getting an opportunity at the NBA level, according to Marc Stein, who reports (via Twitter) that the veteran guard is signing with the Lakers. 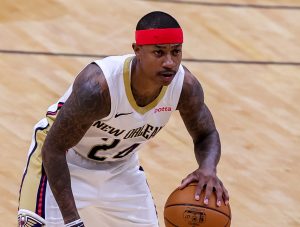 The Lakers have two injured players (Trevor Ariza and Kendrick Nunn) and three more in the health and safety protocols (Dwight Howard, Malik Monk, and Talen Horton-Tucker), so they’re eligible to temporarily add up to two free agents due to the NBA’s hardship provision. Thomas will sign via hardship and will get a 10-day contract, Shams Charania of The Athletic confirms (Twitter link).

Thomas, who had been unable to secure an NBA opportunity through the season’s first two months, signed a G League contract and joined the Grand Rapids Gold, Denver’s affiliate. He made his debut on Wednesday and had a massive game, putting up 42 points, eight assists, and six rebounds in 42 minutes. That performance likely helped convince the Lakers to give him a shot.

Thomas has appeared in just 55 total NBA games since the start of the 2018/19 season for the Nuggets, Wizards, and Pelicans, averaging 11.1 PPG and 3.2 APG on .393/.381/.771 shooting in 21.0 minutes per contest during that time. The 32-year-old was bothered for years by hip problems, but has said he’s fully healthy now and recently represented Team USA in a pair of qualifying games for the 2023 World Cup.

NBA can receive permission to carry extra players if they have four or more players affected by the health and safety protocols and/or by longer-term injuries. The Lakers will have to either let Thomas go or create room on the 15-man roster for him once a couple of their unavailable players are ready to return.

Thomas’ 10-day contract will pay him $151,821 and will carry a $95,930 cap hit. The overall cost of the signing will be a little higher for the Lakers, since it’ll also increase their tax bill.