The Lakers have made a change to one of their two-way contract slots, announcing today that they’ve signed forward Sekou Doumbouya to a two-way deal and waived big man Jay Huff. 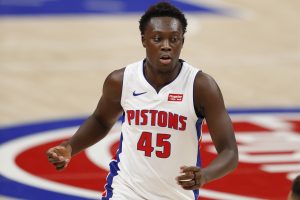 Doumbouya began the season on a two-way contract with the Lakers, but was waived in November while he was recovering from a foot injury. At the time, Los Angeles brought in Chaundee Brown to fill Doumbouya’s two-way slot. Brown has since been replaced by Mason Jones, while Doumbouya is now taking Huff’s spot.

The Pistons sent Doumbouya to the Nets in their DeAndre Jordan trade during the 2021 offseason, and the young forward was subsequently flipped to the Rockets, who waived him. In the month he spent with the Lakers earlier this season, Doumbouya averaged 7.0 PPG and 3.0 RPG in two appearances (8.0 MPG).

Huff, who caught on with the Lakers after going undrafted out of Virginia, logged just 20 total minutes with the team across four games. At the G League level, he recorded 10.0 PPG, 7.0 RPG, and 2.3 BPG in eight games (22.1 MPG) for the South Bay Lakers.