7:08pm: The trade is official, according to a Wizards press release. The pick Washington is receiving is a conditional seconder (2023 or 2024 from Boston via Charlotte).

The Hornets’ announcement states that the Wizards will receive the Celtics’ 2023 second-rounder if it’s not in the top 45. Presumably, if that pick lands in its protected range, Washington would instead get Boston’s 2024 second-rounder. 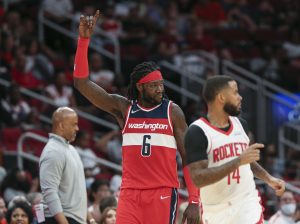 1:26pm: The Wizards are finalizing a deal to send veteran center Montrezl Harrell to the Hornets, tweets Shams Charania of The Athletic.

Washington will get Vernon Carey and Ish Smith in return, according to ESPN’s Adrian Wojnarowski (Twitter link). The Wizards will also receive a second-round pick, per Chris Haynes of Yahoo Sports (Twitter link).

Harrell, 28, will provide a rugged interior presence for a Charlotte team that has been searching for help in the middle. He was acquired from the Lakers in the five-team offseason trade that sent Russell Westbrook to L.A., and averaged 14.1 points and 6.7 rebounds in 46 games with the Wizards.

Moving Harrell relieves the logjam in the middle that Washington has been dealing with ever since Thomas Bryant returned from an ACL injury last month. However, the timing of the move is interesting because Harrell talked publicly over the weekend about the negative mood in the team’s locker room.

Harrell has a $9.7MM expiring contract, and the Hornets will have early Bird rights on him this summer, tweets Bobby Marks of ESPN. Harrell is a North Carolina native, which may make him more likely to remain in Charlotte.

Smith, who played two seasons in Washington before going to Charlotte, has a $4.7MM non-guaranteed contract for next season. Carey will make $1.8MM next year and has a $1.9MM team option for 2023/24.