FEBRUARY 4: Louzada announced today (via Twitter) he has undergone surgery on the torn medial meniscus in his left knee and that he’ll go through a process of “rest and rehab” (hat tip to Andrew Lopez of ESPN). 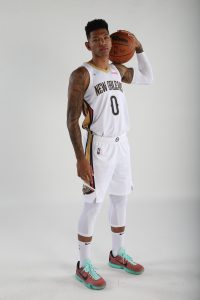 JANUARY 23: Pelicans wing Didi Louzada has suffered a torn medial meniscus in his left knee and is out indefinitely, the team announced. Louzada suffered the injury during the second quarter of a game between the Pelicans’ G League affiliate, the Birmingham Squadron, and the South Bay Lakers on Friday. A surgery date has yet to be determined.

Louzada was suspended for 25 games without pay in November for violating the league’s anti-drug policy. He returned from the suspension less than two weeks ago, but hasn’t suited up for a game with New Orleans since the incident.

A 22-year-old from Brazil, Louzada was the 35th overall pick in the 2019 draft. After spending his first two seasons in Australia, he signed with New Orleans in late April 2021. The Pelicans turned down their team option on him last summer in order to sign him to a new four-year contract that includes two fully guaranteed seasons.

Louzada has logged just seven minutes in two games this season after appearing in three contests as an NBA rookie last spring.

He appeared in four games with Birmingham this season, averaging 11.3 points, 3.8 rebounds and 1.5 assists in 24.3 minutes per contest.