9:53am: The Spurs have officially waived Dragic (Twitter link via Paul Garcia of Project Spurs). As noted below, he’ll clear waivers and become a free agent on Thursday. 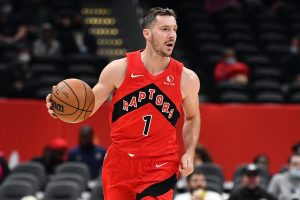 8:30am: The Spurs and point guard Goran Dragic have reached a buyout agreement, reports Shams Charania of The Athletic (Twitter link).

Assuming Dragic is officially released today and clears waivers – which is a near-certainty due to his $19.4MM cap hit – he’ll become an unrestricted free agent on Thursday. At that point, he’d be free to sign with any team except the Raptors — NBA rules prohibit a team from re-signing a player it traded earlier in the league year if that player is cut by his new team.

Charania doesn’t identify any specific suitors for Dragic, but says “a slew” of teams are expected to pursue the playoff-tested veteran.

The Mavericks were viewed at one point as a potential frontrunner for Dragic, but acquired Spencer Dinwiddie at the trade deadline and are no longer believed to be in the market for a point guard. General manager Nico Harrison said last week that he thinks Dallas’ roster is “set.”

The Heat, meanwhile, are no longer ineligible to reacquire Dragic, since he was traded for a second time after Miami moved him in August. The guard has been working out in Miami for much of the season and the Heat have two open roster spots, so a reunion seems plausible, even though the club wasn’t mentioned by Wojnarowski over the weekend as a likely suitor.

Dragic hasn’t played since November, having taken a personal leave of absence from the Raptors up until he was traded to San Antonio at last week’s deadline.