Warriors guard Stephen Curry was named the MVP of the 2022 NBA All-Star Game in Cleveland on Sunday night, following a record-setting performance in which he put up 50 points and made 16 three-pointers for Team LeBron. 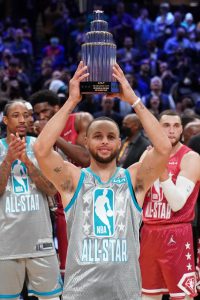 Curry’s 16 three-pointers obliterated the previous All-Star record of nine and are more than any player has made in a regular season game in NBA history (Curry’s teammate Klay Thompson holds that record, with 14).

While Curry’s outside shooting stole the show for much of the night, it was his teammate – and fellow Akron, Ohio native – LeBron James who hit the game-winning shot to secure a 163-160 win for Team LeBron. Curry said after the game that it was an ideal way for an All-Star Game in Cleveland to play out.

“It was kind of a perfect ending,” Curry said, per ESPN’s Dave McMenamin. “Obviously, I got the MVP; I played well the whole night. (LeBron) hit the game winner. All the history of our series and the Akron ties, and all that kind of going into how the night went, so it was pretty — can’t really draw it up any other way. It’s right on the nose of how it should go.”

James (24 points, eight assists, six rebounds) and Giannis Antetokounmpo (30 points, 12 rebounds) were among the other Team LeBron standouts, while Joel Embiid led the way for Team Durant with 36 points and 10 boards.