Celtics guard Marcus Smart has been named the league’s Defensive Player of the Year, the league announced today in a press release. 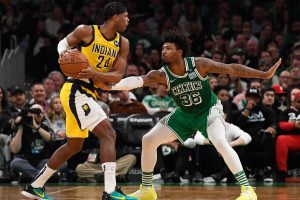 Smart is the first guard to earn the honor since Gary Payton in the 1995/96 season. He’s also the second Celtic to win the award, joining Kevin Garnett (2007/08).

The 100 votes among sportswriters and broadcasters were spread out, reflecting that there was no clear-cut favorite for the award this season. Smart’s candidacy was aided by Boston’s strong finish and status as the league’s top-rated defensive unit. The team allowed the fewest points per game and lowest field-goal percentage.

The full results can be viewed here.

Smart ranked seventh in the NBA in steals per game (1.68) and tied for sixth in total steals (119). Smart, who signed a four-year, $77MM contract last offseason, ranked among the league leaders in several “hustle” categories, finishing tied for fourth in loose balls recovered (75) and tied for 10th in both deflections (206) and charges drawn (16).

37 thoughts on “Marcus Smart Named Defensive Player Of The Year”