MAY 20: The Hornets have officially announced Kupchak’s extension. 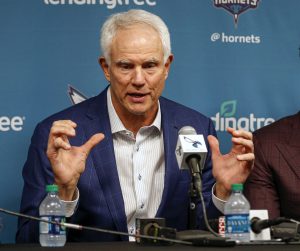 “Mitch has done a great job leading our organization,” team owner Michael Jordan said in a statement. “He and his staff have assembled a talented, young team, and I’m excited about our future. I look forward to continuing to work with Mitch in the years ahead as our team continues to improve.”

MAY 19: President of basketball operations and general manager Mitch Kupchak told reporters that he has signed a multiyear extension with the Hornets, as Roderick Boone of The Charlotte Observer relays (via Twitter). It was previously reported that Kupchak was in the final year of his contract.

“For better or for worse, I will be here for the next couple of years,” Kupchak said Thursday, according to Steve Reed of The Associated Press. The executive declined to say when the contract will expire.

Kupchak has been with Charlotte since April of 2018. He was previously the long-time GM of the Lakers, having worked for the team for three decades after he retired as a player. Kupchak has won a total of 10 NBA championships in his lengthy career, three as a player and seven as an executive.

Kupchak has acquired an impressive array of talented players since he became the head of the Hornets’ basketball operations, including Miles Bridges, Devonte’ Graham (now on the Pelicans), Terry Rozier, Gordon Hayward, P.J. Washington, Cody Martin, Kelly Oubre, and All-Star LaMelo Ball, among others. However, the team has missed out on the playoffs in his four years at the helm, having been eliminated in the play-in tournament the past two seasons, which led to former head coach James Borrego being fired.

When asked about the contract status of Bridges, who’ll be a restricted free agent this summer, Kupchak said the team plans to re-sign him.

“Our intention is to keep Miles long-term, yes. He’s a big part of our future,” he said, per Boone (Twitter link).

Kupchak, who turns 68 next week, also said Charlotte has interviewed eight candidates for the team’s head coaching vacancy thus far (which aligns with our tracker), and he’s “hopeful of having someone in place within two weeks.” He added that he’s hoping to find a coach to take the team “to that next level” (Twitter link via Boone).