Bradley Beal will decline his $36.4MM player option in order to become an unrestricted free agent, Michael Scotto of Hoops Hype reports via a source. 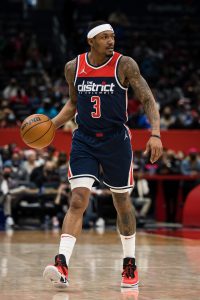 It’s long been anticipated that Beal would decline the option and sign a long-term deal. He indicated in both March and May that he was leaning toward re-signing with the Wizards.

Beal, who missed the final 33 games of the season because of an injured left wrist, is eligible for a new five-year contract with the Wizards worth a projected $247MM+. The most a rival team could offer him in free agency would be a projected $183.6MM over four years.

Beal has been the subject of trade rumors for years but has so far remained loyal to Washington. Presuming he re-signs with the Wizards, he’ll get a chance to play a full season with midseason acquisition Kristaps Porzingis. Beal’s backcourt partner for next season remains a mystery — Washington is expected to clear its logjam at the forward spots and seek to improve its backcourt situation. The team also holds a lottery pick at the No. 10 spot.