As Larry Coon explains in his invaluable CBA FAQ, the term “base year compensation” technically no longer shows up in the NBA’s Collective Bargaining Agreement, and hasn’t since 2011. A relic of past agreements, the base year compensation rule was intended to prevent teams from signing free agents to new contracts that were specifically intended to facilitate salary-matching in trades.

While the base year compensation rules have mostly been adjusted and/or removed from the CBA in recent years, there’s still one situation where they apply. Teams have to take them into account when completing sign-and-trade deals.

The BYC rules apply to a player who meets all of the following criteria in a sign-and-trade: 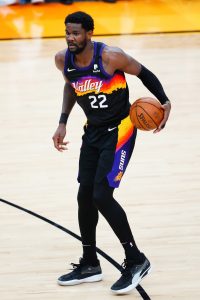 Here are a couple specific examples to help make things a little clearer:

Let’s say the Suns want to sign-and-trade Deandre Ayton this offseason. He’s a Bird free agent, his new salary will be well above the minimum, and the Suns project to be an over-the-cap team. Having made $12,632,950 in 2018/19, Ayton figures to receive a raise significantly higher than 20% — if he signs a maximum salary contract, it’s projected to start at $30,500,000. So he meets the BYC criteria.

In a scenario where he signs a max deal as part of a sign-and-trade, Ayton’s salary for matching purposes from the Suns’ perspective would be $15,250,000, which is 50% of his new salary (that amount is greater than his previous salary). From his new team’s perspective, Ayton’s incoming figure would be his actual salary, $30,500,000.

Often, a team acquiring a player via sign-and-trade doesn’t have the cap room to sign the player outright, or else there would be little need to negotiate a sign-and-trade. That means salary-matching is required, and is complicated by base year compensation rules.

The gap between the salary-matching figures from the two teams’ perspectives complicates sign-and-trade talks, requiring both clubs to include additional pieces to make the deal work. A third team could even be necessary to make the numbers line up.

The base year compensation concept doesn’t surface all that often, due to the specific criteria that must be met. However, it looms large over many sign-and-trade attempts, reducing the likelihood of teams finding a deal that can be legally completed. And it could affect a number of potential sign-and-trade candidates during the 2022 offseason.

Rival teams hoping to land players like Ayton, LaVine, Jalen Brunson, Mitchell Robinson, Miles Bridges, or Collin Sexton via sign-and-trade this summer would almost certainly have to navigate base year compensation complications to make it happen.

A previous version of this post was published in 2019.