Heat forward P.J. Tucker will decline his $7.35MM option for next season, Shams Charania of The Athletic tweets. Tucker will be an unrestricted free agent and several contending teams are expected to compete for his services. 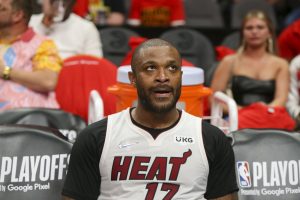 It’s still possible Miami could re-sign him on a longer deal and/or more money. Miami president Pat Riley declared in his postseason press conference that bringing back the defensive ace was a high priority.

“P.J. is a cornerstone,” Riley said. “I would love to have Tuck back next year. He’s part of our core. He’s special.”

Non-taxpayer teams could pursue Tucker using their mid-level exception, worth a projected $10.349MM in the first year.

Miami holds Tucker’s Non-Bird rights and could offer him up to four years on a salary starting at 120% of his previous cap hit ($7MM this past season).

Tucker had been planning to opt out in search of a raise, but Miami is optimistic about retaining his services, Hoops Rumors’ JD Shaw tweets.

Tucker won a championship with the Bucks in 2021, starting 19 of Milwaukee’s 23 postseason games during its run.