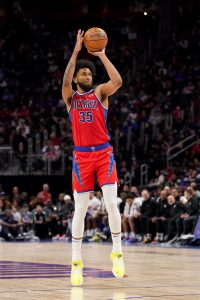 After being selected by the Kings with the second pick in the 2018 draft over multiple future All-Stars, Bagley struggled through erratic playing time and a variety of injuries with Sacramento, but produced on offense when given some leeway by the team. He holds career averages of 13.6 PPG, on 50.1% shooting, and 7.4 RPG.