11:22pm: The Raptors’ new deal with Young is already official, according to NBA.com’s transactions log. That signals that the team technically signed Young to a veteran extension on June 30, rather than waiting for him to reach the open market and signing him to a free agent contract. 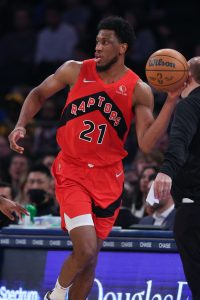 For practical purposes, the outcome is the same — the Raptors have locked up Young to a deal reported to worth $16MM over two years. One notable difference is that he’ll become trade-eligible immediately instead of on December 15 like a free agent signee.

5:47pm: The Raptors are re-signing forward Thaddeus Young, according to Chris Haynes of Yahoo Sports (Twitter link), who hears from agents Jim Tanner and Max Wiepking that Young will get a two-year, $16MM deal that includes incentives.

Toronto held Young’s Bird rights after acquiring him from San Antonio at February’s trade deadline, giving the Raptors the ability to exceed the salary cap to retain him.

The 15th pick of the 2007 draft, 2021/22 was Young’s 15th NBA season. He played for Philadelphia during his first seven seasons before bouncing around a little bit, making stops in Minnesota, Brooklyn, Indiana and Chicago prior to last season.