JULY 6: The Wizards have officially signed Wright, the team announced today in a press release.

“Delon’s versatility as a playmaker, scorer and defender will help us solidify our backcourt rotation,” Wizards president of basketball operations Tommy Sheppard said in a statement. “His size allows him to play and defend both guard positions and will give us flexibility with our lineups.” 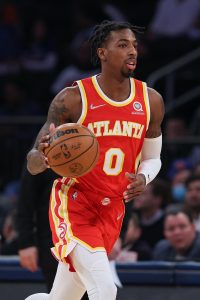 Both years are guaranteed, David Aldridge of The Athletic tweets.

The contract will eat up a good portion of Washington’s $10.49MM mid-level exception.

Wright is the second significant point guard acquisition made by Washington this week. The Wizards are acquiring Monte Morris in a four-player deal with Denver. Journeyman point guard Ish Smith is being shipped to the Nuggets as part of that deal.

A report surfaced earlier on Thursday that Washington was interested in Wright.

The 30-year-old has played for six organizations, most recently the Hawks. He was a regular in their rotation last season, appearing in 77 regular-season contests, including eight starts. He averaged 4.4 PPG, 2.4 APG and 1.2 SPG in 18.9 MPG.