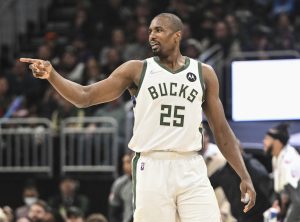 JULY 4: Free agent big man Serge Ibaka has agreed to re-sign with the Bucks on a one-year contract, according to Shams Charania of The Athletic (Twitter link).

Ibaka is a three-time All-Defensive player who led the NBA in blocks per game in 2012 and 2013 and was a key member of the Raptors’ 2019 championship team.

However, back issues have slowed him down to some extent in recent years — he underwent surgery in 2021 and didn’t look like his old self upon returning.

While terms of Ibaka’s new deal aren’t yet known, it appears the Bucks are confident in his ability to be a useful depth piece in the frontcourt now that he’s another year removed from that procedure on his back.

Ibaka is the fifth free agent to agree to terms with the Bucks in the last few days, joining Bobby Portis, Joe Ingles, Jevon Carter, and Wesley Matthews. Milwaukee also has eight players on existing guaranteed contracts, with first-rounder MarJon Beauchamp set to join that group.