JULY 12: The Timberwolves have officially signed Forbes, according to the transactions log at NBA.com. 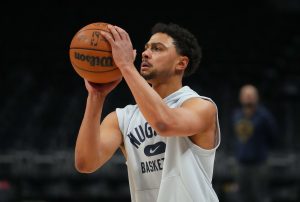 JULY 1: The Timberwolves have agreed to terms on a deal with free agent shooting guard Bryn Forbes, sources tell Jon Krawczynski of The Athletic (Twitter link). It will be a minimum-salary contract, tweets Chris Hine of The Star Tribune. Darren Wolfson of 5 Eyewitness News adds (via Twitter) that it will cover just one year.

It was new president of basketball operations Tim Connelly who traded for Forbes this past season when he was still running the Nuggets’ front office.

Forbes is one of the NBA’s most reliable three-point shooters. Since his rookie year in 2016/17, he has knocked down at least 38.8% of his attempts from beyond the arc in five consecutive seasons, and he owns a career rate of 41.3%. However, he’s undersized for a shooting guard and can be targeted by opposing teams on defense.

The Wolves had been dealing with an apparent roster crunch entering the day, but opened up some roster spots when they agreed to send five players to Utah in a blockbuster trade for Rudy Gobert. Forbes projects as a bench piece who will help the club replenish its depth.