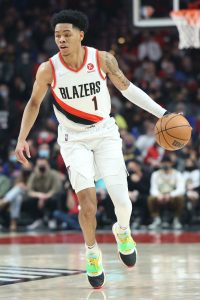 “Anfernee is already one of the league’s top shooters and this past season he showed elite ability as a shot creator and distributor,” GM Joe Cronin said as part of a larger statement. “We are excited for him to continue the growth he has shown in his first four seasons in Portland.”

The team announced its new deal with center Jusuf Nurkic within the same release.

Reports leading up to free agency suggested Simons would likely be in line for a deal worth $80MM over four years, so it appears he did better than anticipated. It’s also possible that $100MM is the max Simons could earn on the new contract after incentives and the base value is lower.

While Simons certainly earned a significant raise on the $3.9MM he made last season, there are some questions about how he might fit next to another ball dominant player like fellow guard Damian Lillard. Simons’ emergence came on the heels of injuries to Lillard and CJ McCollum, who was later traded to New Orleans.

Simons is an excellent athlete, but he’s not very strong and has been a poor defender to this point in his career. Still, he’s young and could improve with time.