AUGUST 9: Dieng’s signing is official, the Spurs announced in a press release.

JULY 5: The Spurs and free agent big man Gorgui Dieng have agreed to a one-year deal, according to Shams Charania of The Athletic (Twitter link). 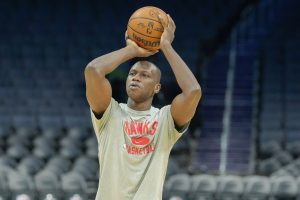 It’s a reunion for Dieng and the Spurs — he signed with San Antonio on the buyout market near the end of the 2020/21 season before joining the Hawks last summer.

Terms of the new agreement aren’t yet known, but Dieng is coming off a one-year, $4MM contract and wasn’t a regular part of Atlanta’s rotation in 2021/22, appearing in 44 games and averaging a career-low 8.4 minutes per contest. His 3.5 PPG and 2.8 RPG were also career worsts. In other words, it seems unlikely he’ll get more than the veteran’s minimum from the Spurs.

The 32-year-old, who will be entering his 10th NBA season, has also spent time with the Timberwolves and Grizzlies since entering the league as the 21st overall pick out of Louisville in 2013.

Dieng will be San Antonio’s 14th player, assuming the team signs all three of its first-round picks and retains Tre Jones and Keita Bates-Diop, both of whom are on non-guaranteed contracts.

The Spurs still have a ton of cap room at their disposal, so it’s possible a more significant roster shake-up is coming, but it remains unclear how they intend to use that room.