Celtics big man Robert Williams has undergone an arthroscopic procedure to remove loose bodies from his left knee and to address swelling in that knee, the team announced today (Twitter link). 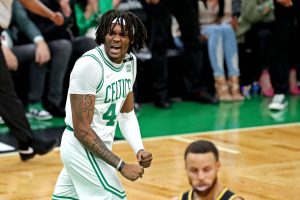 While the surgery had been expected, the Celtics revealed that the recovery timeline will be longer than initially anticipated. According to the club, Williams is expected to resume basketball activities in approximately eight-to-12 weeks. ESPN’s Adrian Wojnarowski previously estimated a four-to-six week timetable.

Williams initially underwent surgery on the knee in March after tearing his meniscus. He was able to return to the court less than a month later and played a part in the Celtics’ run to the NBA Finals, though he wasn’t at 100% in the postseason. The 24-year-old sat out five games in the second and third rounds of the playoffs and reportedly required extensive treatment as he dealt with fluid build-up.

The decision was made this fall for Williams to undergo another procedure when he began his ramp-up process and experienced some discomfort in the knee. Based on the timeline announced today by the Celtics, it sounds like he’ll miss at least the first month or two of the regular season.

In Williams’ absence, Boston will lean on big men Al Horford and Grant Williams, with others like Luke Kornet, Noah Vonleh, Mfiondu Kabengele, and Luka Samanic vying for roster spots and playing time.

The Celtics also confirmed today (via Twitter) that Danilo Gallinari underwent surgery to repair his torn left ACL. They didn’t announce a projected recovery timeline for the forward, but the expectation is that he’ll miss most or all of the 2022/23 season.