SEPTEMBER 7: The Nets have officially signed Morris, the team announced today in a press release. As previously reported, Morris’ new deal is said to be non-guaranteed.

AUGUST 30: The Nets will add veteran forward Markieff Morris on a one-year contract, tweets Shams Charania of The Athletic. 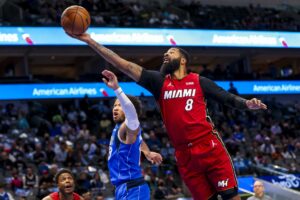 Morris spent last season with the Heat, but appeared in just 17 games after suffering a neck injury. He averaged 7.6 points and 2.6 rebounds in 17.5 minutes per night and likely would have played a much larger role if he hadn’t been hurt.

Brooklyn will be the seventh NBA team for Morris, who entered the league in 2011. He has become mainly a bench player over the past four years and was an effective reserve for the Lakers during his last healthy season in 2020/21.

Morris, who signed minimum-salary deals with both L.A. and Miami, will likely get the same arrangement from the Nets. He may be seen as a replacement for LaMarcus Aldridge and Blake Griffin, who both remain unsigned.